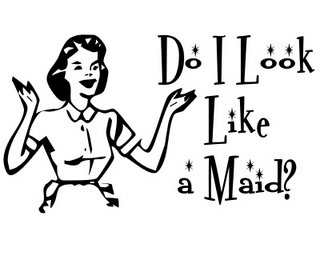 A while back I said that if you all helped me reach 320 followers, I would make a new music video as a follow-up to “My Van is Stacked.” Not only did you help me reach that number, but exceed it. So I am here to make good on my promise. Hopefully you will forgive my tardiness. Writing/directing/producing/performing/editing a music video I’m not getting paid for has a way of taking awhile.

Last time, I paid homage to Sir-Mix-a-Lot’s “Baby Got Back.” It just came to me one day while shopping for a new minivan, and a parody was born. This time, however, the song wasn’t sitting on a platter for me. I agonized awhile over what I was going to do. Finally, I made the decision I was probably destined to make since the age of nine: I was going to parody The Monkees. 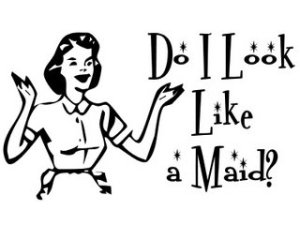 And with that, “(I’m Not Your) Live-In Maid” came to be. My husband was skeptical, thinking that a lot of people would not be familiar with The Monkees’ song, “(I’m Not Your) Steppin’ Stone.” But I had your back, fair readers. I believed you were more culturally literate than that. (More precisely, I think I immaturely said, “Well, people are STUPID if they don’t know that song.”) But JUST in case, you can listen to “(I’m Not Your) Steppin’ Stone” here (and enjoy a delightfully comic romp), and consider yourself enlightened. You’re welcome.

Now before I debut the video, there are a few things that must be said. First, my sincerest apologies to “(I’m Not Your) Steppin’ Stone” songwriters, Bobby Hart and the late Tommy Boyce, for completely butchering what is most decidedly one of the world’s most perfect rock ‘n’ pop masterpieces. Secondly, you may not know this about me, but I can not sing. Therefore, my performance is a bold slap-in-the-face embarrassment to the flawless and magically primal vocals of Micky Dolenz. There is no need to patronize me with compliments. I will call you out for your insincerity, albeit kind in its purposes. It’s okay. I know what I’m putting out there, and I have no delusions about what it sounds like. Fact: I would have gotten booed off of Showtime at the Apollo.

And we’re not even going to talk about sound and video quality. I properly cursed out Windows Movie Maker multiple, multiple times. Alas, it is what it is.

With that, I give you the second ever “Are You Finished Yet?” music video, “(I’m Not Your) Live-In Maid”…with bonus features! Ooooooooohhhhh…

Again, HUGE props go to my partner-in-crime and cameraman extraordinaire, my husband, as well as to my ham bone kids, who only whined 49% of the time while making this video.

Produced and Directed by:

Chief of Complaints and Wandering Away: