When I was growing up, listening to the radio in the car with my dad followed one rule: his car, his choice. But I never knew where exactly that choice was going to land as a cacophony of song snippets whirled in and out of my ears. My dad worked the car radio (and the television, for that matter) like a roulette wheel. It was as if he needed to check what was on each and every single station to make sure he wasn’t missing anything good…and then check it again in case a certain station had moved on to a new song while he was checking all the others. Frankly, it was maddening.

My siblings and I were conditioned well enough to know my dad wouldn’t willingly stay on a station that played “our” music. But sometimes he would fool us and linger on Q106.5 just long enough to make us believe he was throwing us a bone:

-Wake up, little Susie, wake up…

Apparently, what we thought was radio benevolence on my father’s part was really just him being distracted by some jackleg driver. Once his attention was fully back to the music, the roulette wheel began turning once again.

“But this is the Everly Brothers. This is good stuff.”

Then he would proceed to harmonize off-key and finger drum on the steering wheel.

After “Wake Up Little Susie” would come something like “Build Me Up Buttercup.” Okay, I could get down with that. Before I knew it, the whole family started singing along. Everyone except my dad, of course:

-Get your motor running…head out on the highway…

“But I can’t finger drum to that stupid song.”

Sometimes, just sometimes, if we protested enough, he realized he wasn’t going to be able to hear his song anyway and relented by changing the station back. We would declare victory by picking up our sing-a-long without missing a beat. But my dad made sure to make a visibly disgusted facial expression. And he would change the station just before the last note played as a way of making sure we understood his dominance.

But there were times we knew better than to protest. If the spinning radio roulette dial landed on anything sung by Jimi Hendrix, Janis Joplin, CSNY (or CSN), The Doors, The Beach Boys, The Mamas & The Papas, or the crown jewels, The Beatles (or any of their solo incarnations), that was the final verdict. No trial. No jury. My own mother could have been performing a song on another radio station at the same time and it wouldn’t have mattered. Furthermore, if we dared to speak during one of these songs, we would get cut off by a fervent and frantic SHHHHHH! as the volume on the radio simultaneously increased to drown out our voices. Epic finger drumming ensued.

And forget about Sunday mornings. That was Beatles Brunch on KSHE95. I’m pretty sure there were quite a few times we had to sit in the parking lot of church to finish listening to a song before going into Mass.

In hindsight, the car rides of my youth listening to the radio with my dad explain a lot about my inevitable music preferences. I love almost everything from the 60’s and 70’s. In middle school, I was much more likely to know all the lyrics to Chicago’s “Saturday in the Park” than to Bon Jovi’s “You Give Love a Bad Name” (which is also why when my classmates broke out into that song during music class one day, I hid in the back and swore the line went, “You give love a Band-Aid”). I also like to characterize my general musical asthetic as a “totally random mixed tape.” I like a little bit of everything, probably because that’s all I ever really heard on the radio as a kid. A little bit of everything. And entire Beatles songs. I’m also not half bad at those trivia night categories where you have to name a song after hearing just one line of it.

Because that’s how we listened to the radio when I was a kid. Take a listen for yourself:

Head on over to Emily & Ashley’s Remember the Time Blog Hop to check out other fun posts. Just click on the cool logo for a list of other posts about memories of the radio! 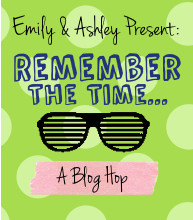