I don’t know about you, but I am woefully behind on my Christmas shopping. See, there’s this thing called Life, and right now it really seems to have an issue with letting me wander aimlessly down the aisles of Toys ‘R’ Us, looking for things least likely to end up being donated next year during our annual pre-Christmas toy purge.

Thankfully, there’s this little gift-giving mantra that’s been going around which might be of tremendous help to me. A friend of mine was the first to enlighten me to it. She, of course, saw it on Pinterest. Because that is where all helpful and clever and visually perfect things are born into this world. But I have since seen it floating around elsewhere on the internet, mainly out of the mouths of comment sections. So you may have heard it as well. It goes like this:

It’s as brilliant as it is adorably catchy. And anything that can cut down my time in the stores this holiday season is also much appreciated. I now have distinct parameters to guide me. Here is how I see this going down for my own kids:

Something They Want:  My son has made it very clear that he wants something called “Stomp & Chomp Grimlock.” Turns out, it’s pretty much the Robert Wadlow (a.k.a. “The Alton Giant”) of Transformers. Terrific. But, it’s the only thing he has asked for. In his words, “I want Santa to bring Stomp & Chomp Grimlock. And the elves can make me whatever else they want.” He is a stoic, that one.

My daughter wants a hampster. Hampsters smell, and she already sucks at feeding the dog. So she’s not getting a hampster. She doesn’t believe in Santa anymore anyway, so Christmas is just another day of her mom dashing her hopes and dreams. Big whoop. She’s probably getting an MP3 player instead. I’m pretty sure she’ll realize she wants it as soon as she opens it.

Something They Need: This one is easy. My daughter needs eyes that don’t roll at 74% of what I say to her. And my son needs the ability to flush the toilet after he uses it. (Crap. I just checked Amazon, and apparently those things don’t come in their sizes.)

Something To Wear: Another easy one. I’m getting my daughter anything that doesn’t read Justice on the tag. My son will be getting some new uniform pants that actually cover his ankles. 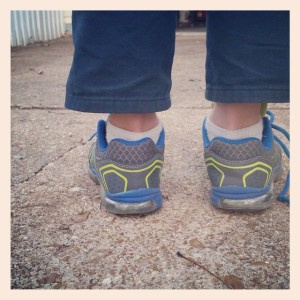 Something To Read: Well, look at that. Do I have the perfect gift to satisfy THIS one! So hey, did you know there’s this new children’s book out now called Absolute Mayhem? Of course you did. I’ve only been blabbering on about it for what probably seems like forever now. So I will keep it short and sweet: buy my book. My kids will be getting their own copies of Absolute Mayhem for Christmas, and so should yours. I mean, hey, I’m helping you out here. Head over to KellySuellentrop.com or Amazon to get your copy today, and check one more thing off your list (bonus: it’s still on sale!). Or you can head over to one of the six other bloggers who will be hosting giveaways of the book this week to win a free copy!

Think of how happy your children will be when they find some Mayhem under the tree!

See, cute Pinterest gift-giving mantra? I can rhyme, too!

Congratulations to the winners of last week’s giveaway of Absolute Mayhem: Jackie Law and Megan Biere! Looks like they have one less gift to worry about getting this holiday season.