Last week, my grandparents’ old house went on the market. It has been inhabited by another family for almost twenty years now, yet every time I drive by it, I still think of it as Grandma and Grandpa’s house…despite the many renovations. My mom, my aunt and I decided to go to the open house, to see what had changed and what had stayed the same. And perhaps just to be there one last time, now that my Grandpa is gone and my Grandma is mostly lost within her own mind. The following is my reflection on that experience.

As I turned the familiar door knob, I could almost picture the sign on the door that said, “Back Door Guests Are Best.” It was the exact same door knob that squeaked a bit. The one I had turned so many times before. The one that opened up to the small galley kitchen, the sound of KMOX talk radio, the smell of Virginia Slims, and the sight of Grandma drinking her instant coffee or Grandpa reading the paper. But this time, the door opened up to a scene totally unfamiliar to me.

The “cookie drawer,” filled with wafers and devil’s food and rogue pretzel sticks for the taking as soon as you walked in, was no longer there. Neither was the rest of the kitchen as I had known it. Instead, a wall had been knocked down to make way for a rather grand culinary room…one with space enough to have kept Grandma from shooing us out of the kitchen when we all inevitably ended up in there during family gatherings.

While the new kitchen was beautiful, the disconnect troubled me. Standing just inside the back door that had seemed so familiar and real, I felt the old kitchen, yet it wasn’t there. Like an amputee who can still feel her leg itching after it is gone.

My memory did not have to work so hard upon walking into the dining and living rooms. Though a little paint and paneling did some transforming, the two rooms felt essentially unchanged. Our family could have easily sat around the table for some Turkey Tetrazzini or gathered to open presents on Christmas Eve without feeling as though much time had passed.

And the staircase…with the same wobbly banister. The one Grandpa descended every Halloween, wearing the rubber mask of a crotchety old man biting a cigar, terrifying us grandkids as we sifted through our candy hauls in the living room. The one I used to run up upon arrival, to greet the pair who often sat in their respective recliners in the master bedroom, excited to show them a good report card or tell them about my latest soccer game. Funny…these other people had somehow managed to take the creak out of the third step from the top.

They also managed to make the entire top floor unrecognizable to me. Between the addition and the repurposing of existing rooms, I struggled to feel my childhood lived among the comfort that used to be here. Spending the night in the room that had once belonged to my mother and my aunt…now a bathroom. Feeling the silky softness of Grandma’s stockings as they hung to dry in the bathroom…now a storage closet. Creeping into the dark, cave-like office and watching Grandpa pay bills, the sound of his adding machine clicking away to the beat of Nat King Cole…now a bedroom with blinding track lighting. And that spot, in their recliners, where we could almost always find Grandma and Grandpa watching Jeopardy or Murder She Wrote…where we would tell them about our day…where Grandma would tie a perfect bow in the back of our dresses…where I interviewed Grandpa about his time in World War II and saw him cry as he retold the heroic death of a fellow soldier…where they told us over and over again that they were proud of us or loved us…now, a laundry room.

A whole life had been completely erased. These two people who used to live and breathe and love and fight and clean and clutter could not be found anywhere. Like they had never existed. It was enough to completely break my heart in two. And in many ways, it did.

But then the basement made it whole again. 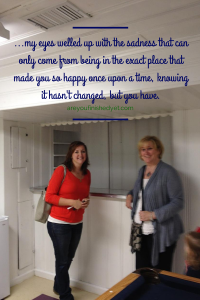 Perhaps the part of the house most unattractive to potential buyers, due to its lack of updates, was the part I cherished most.The basement was where my eyes welled up with the sadness that can only come from being in the exact place that made you so happy once upon a time, knowing it hasn’t changed, but you have. In this particular space, my mind did not need to recreate the vision of what this house used to be, because there it was. There was the corner where the television sat, the one I used to watch Nickelodeon and MTV on, since we didn’t have cable at my house. And there was the built-in bookcase the fugitive squirrel ran up, scaring the begeezus out of me and my sister. And where the couch was, the one the fugitive squirrel burrowed into and died in. And there was the bar we always played behind with the same ancient sink. And the spot for the air hockey table that yelled “Good shot!” whenever you scored a goal. And the same banister my cousin Julie got her head stuck in. It was all there. It was just missing my family…and a couple of swirly bar stools, “his” and “hers” rocking chairs, a few hundred Irish trinkets, and things like forty-cup coffee pots and serving platters, given to Grandma and Grandpa by people named Mary Kay and Crazy Betty, jammed onto the storage shelves.

I wondered if I was motionless enough, maybe I could transport myself back. Maybe I could will Grandma and Grandpa to come down those stairs one last time. Maybe the current owner would let me stay here just a little while longer…

But it wasn’t my house to stay in anymore. It actually never was my house, but it felt like home every time I walked through the breezeway and opened the back door. Because after all, it was made crystal clear by my grandparents that “back door guests are best.”

41 thoughts on “I Used to Know This House”