Only hours remain of 2014. I for one, am sad to see it go. By in large, it treated me well. But it treated my blog even better. 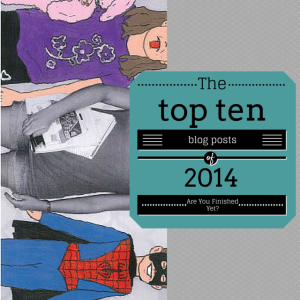 Here is a quick look at the top ten posts of 2014 on Are You Finished Yet?…the ones that garnered the most views. A few are actually from earlier years. Some would say this means my writing has “staying power.” I say it mostly has to do with tagging them with keywords that land them in frequent and weird Google searches. Either way, it’s nice to see some of my favorites seem to have a pretty nice shelf life.

First, I want to give honorable mention to two posts that just missed the top ten, but rank pretty high on my personal list:

“Bad Catholic” (January 2014): You won’t see me talking about religion very often, so get it while it’s hot. This post really seemed to resonate with a lot of folks. So many in fact, I’m wondering if we should break off and start our own “Bad Catholic” sect. Just kidding. Please don’t brand me a heretic.

“I Used to Know This House” (October 2014): A reflection on my recent visit to the home that used to belong to my grandparents, and how I was affected by what had changed, and what had remained the same.

#10 Silence and Kindness In the Wake of #Ferguson

(November 2014) Considering I almost didn’t even publish this piece, I feel immense gratitude that it was so well received and that many others found it spoke to what they were feeling. In addition, I was proud to have it featured on the Huffington Post. Hopefully it can remain as a reminder that the loudest voices don’t always represent the majority, and that we could all do well to practice the spirituality of silence now and again.

(May 2014) As parents, we make choices and sacrifices everyday that go unnoticed. It may not be the flashy gestures of storybooks and movies, but it is how real love stories go.

#8 3 Things They Should Teach in Prenatal Classes

(November 2014) Prenatal classes are so, so short-sighted. Because the real things that suck the life right out of you happen way after the newborn phase, when you’ve lost all hope and all patience to consult parenting handbooks.

#7 The Superhero Keg Party: A Battle for Superiority

(January 2014) This was THE most enjoyable blog post to create. Hands down. I hope my son doesn’t ever feel violated that took such liberties with his toys though.

(April 2013) By now, most of my readers know I was once hit on by Chuck E. Cheese. And it looks like you guys just won’t let me forget it, keeping this little tale of terror in the forefront of my stats.

(June 2014) Did you know there are people out there who claim to be “not a Target person?” I know. It sounds like science fiction. This post might read like a tabloid, but trust me, all these unbelievable claims regarding Target are true.

#4 To My Children’s Grandparents

(September 2014) What started as a little love letter to my parents and my in-laws became a declaration of admiration and appreciation for grandparents everywhere. Not only did this one go over well here on Are You Finished Yet?, but it also recently had people crying all over the place over on Scary Mommy. It made my heart smile to see so many people tagging their own children’s grandparents and sharing it with them.

#3 I Am Afraid I May Have Wished It All Away

(September 2013) This post. This is clearly a special post. I could argue it changed a lot of things for me in regards to my blog, my career path, and my writing in general. I love that it remains relevant to people.

#2 My Plan for Dethroning the Rainbow Loom

(November 2013) The Rainbow Loom craze may have faded for my own children since I first wrote this post, but clearly parents are still annoyed with it…and looking for some cheap alternative toy crazes. Don’t think I haven’t considered patenting that Produce Bag Twist Tie Sculpture Kit.

And, remaining on top for the last two and half years…

#1 Similar Tastes: A Letter To My Daughter On Her Birthday

(March 2012) It feels like just yesterday I wrote this letter for my daughter’s seventh birthday on a Spring Break road trip to Hershey, Pennsylvania. And much of it still holds true, so much so that I reposted it around her birthday this year. It is one of the few posts that consistently gets hits every single day. It doesn’t surprise me that my daughter would inspire a post that so many seem to love. She’s pretty easy to love herself.

So there you have it! My sincerest thanks to all of you who hang here, who read my words, who share them with friends. This blog and my experiences here have brought me more joy than I could possibly convey, and I am looking forward to another year of publicizing the bits of my life that I think will make you sometimes laugh or sometimes cry or sometimes say thank God I’m not the only one.

HaPpy, hApPy, HaPpy New Year to each and every one of you!