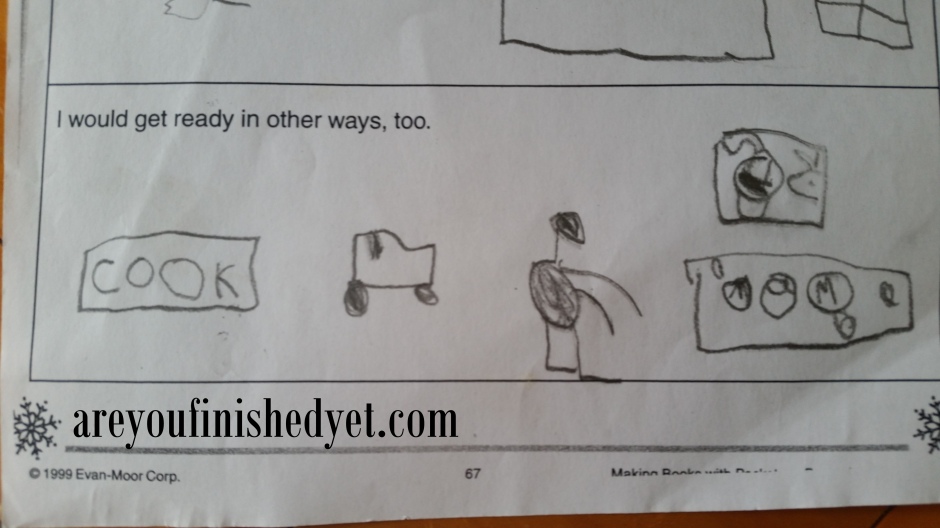 Oh joy. Rapture. Winter is upon us.

(I hope you noticed my lack of exclamation points.)

Our first dose of snow hit us over the weekend, so I guess Fall has officially packed it in for 2014. Christmas has obnoxiously butted its way in front of Thanksgiving, and once again, my children are ill-prepared in the area of winter weather attire. (When will I learn and just buy freaking snow boots as soon as they hit Target’s shelves?) Thankfully, my son’s Kindergarten teacher was ahead of the game and started getting her students into a chilly mindset. The other day, Michael came home with a worksheet about hibernation, and he had to draw pictures of things he would take with him if he had to hide himself away for a warm winter’s nap, just like a bear.

This is what he chose: 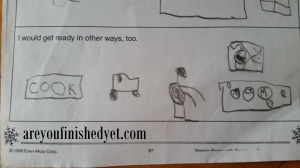 Let me provide you with some captions. A cookbook, a monster truck, a zombie doll, a photo of Santa and his reindeer, and some M&Ms. Aside from being a tad hurt that my son would rather stare at a picture of jolly old St. Nick than his dear, sweet mother, I’d say he has a pretty well-balanced list of necessities and comforts. Although, I doubt he would actually use the cookbook. I feel confident he already knows the recipe for peanut butter and Nutella sandwiches, which is all he is likely to eat.

As I look out at the snowy rooftop of my neighbor’s house, I wonder what I would bring into hibernation.

#1 My crock pot. Nothing says, “I’m checking out for a couple of months,” like no-fuss cooking. Throw in a bunch of stuff you like, turn it on, go to sleep, then nibble on the warm goodness at your leisure. Gourmet for the lazy.

#2 My space heater. Let me not mince words here: I. Abhorrently. Despise. Being. Cold. It’s why I own a knockoff Snuggie.

#3 The world’s longest extension cord. Because otherwise, #1 and #2 would just be dumb. This is what you call forward thinking…which I apparently can only do when it comes to my own comforts and not when it concerns my kids having snow boots.

#4 I would say a picture of my kids, but… I’m still a little hurt over Santa beating me out with my son. So I’m going to be immature and play tit for tat. Instead of a photo of my kids, I’m going to bring a drawing of Lulu and Milo, the characters in my new children’s book, Absolute Mayhem. (By the way, did you know it is coming out December 1st? See what I did there?) While my own kids are pretty adorable, Lulu and Milo have a way of stealing your heart as well. See for yourself:

So, that pretty much covers it. I think I would be in for a pretty nice hibernation, if I do say so myself. But I’m curious…what would YOU take into hibernation? Be forewarned. If you say a picture of Santa instead of me, I might start getting a complex.

Want to stay updated on what is happening with Absolute Mayhem? Please like my new Author Facebook Page!