Halloween bit the big one this year. And considering how I feel about the spooky holiday (I love it like a third child), this was enough to put me in a mini depression that could only be lifted by bite-sized Snickers and a package of pumpkin Peeps. (Yes, I said Peeps. Don’t pollute my comment section with your disparaging Peep hate speeches. All candy has worth. Even Good & Plenty.)

It started when our brilliant Trunk or Treat decoration received not even an honorable mention. I mean sure, we didn’t transform our entire car into a turtle sanctuary and dress up our cute little baby as a turtle like the winning entry. But tell me this idea wasn’t freaking amazing: 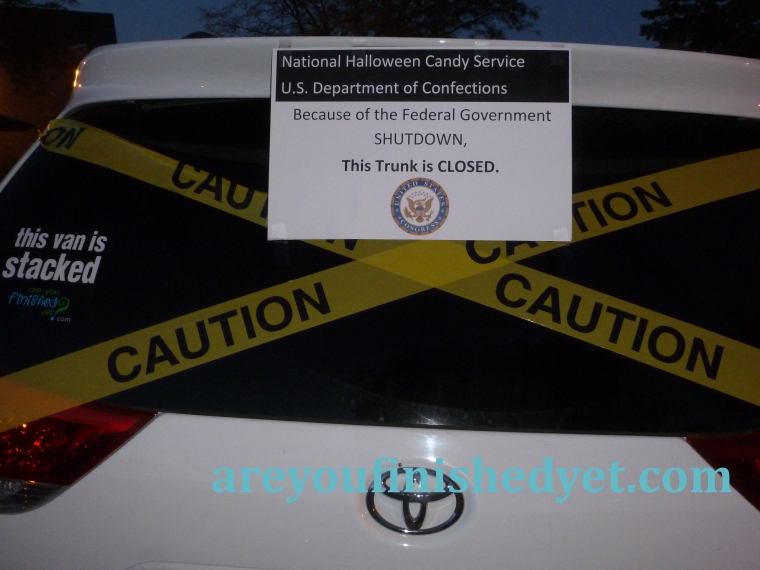 Next year we’ll dial down the clever…and borrow a baby.

Halloween night itself wasn’t any better. Thanks to the rainy, windy weather, we had very few trick-or-treaters. And after a long, busy week, I just couldn’t keep my eyes open long enough to watch my customary scary movie after putting the kids to bed. Is it really Halloween without watching some unsuspecting schmucks explore an old psychiatric hospital, thinking nothing will go wrong? No, it’s not.

Oh…on top of it, my husband and I were proclaimed the worst parents in the world. In our defense, we had no other choice. Our kids were total jacklegs.

Last week I wrote about my new parenting strategy of teaching my kids not to be jacklegs. The universe must have teamed up with my children to test me on that, because two days before Halloween, my husband and I found ourselves at a crossroads. Both kids committed offenses that deserved stiff punishment. In order to spare them the embarrassment of having their transgressions splattered across the blogosphere, I won’t go into detail. But trust me…total jacklegs.

It was all too much for my husband, and bad behaviors so close to a holiday can often lead parents to do the unthinkable when blinded by anger:

“There will be NO trick-or-treating for either of you!”

The words hung in the air for a minute while we all grappled with their mere existence, as if we had just spotted a Sasquatch. Of course the kids did not believe him at first, because parents who take away trick-or-treating is surely folklore. At the same time, my husband came to me and was all like, “I said it. We have to follow through. Are you on board with this?” That question probably should have come BEFORE it was said. Seeing as how I had little choice in my answer, I guess, yes, I was on board.

Once everyone came to terms with the reality of his verdict, there was a multitude of loud noises coming from the kids that I would maybe expect from victims of Chinese water torture. And to be totally honest, I would have joined in on the screaming. But, you know…that whole “be a parent” thing.

This hurts me more than it hurts you is true, people. My kids may not have gotten to go trick-or-treating, but that meant neither did I, on my most beloved of holidays. Not only that, but I had to hear about how unfair it was for two days leading up to Halloween. Like when I ran to Target with Grace and pointed out how cool a box of electric blue cake mix was, and her eyes welled up with tears as she told me not to bring it up…because apparently electric blue cake mix reminded her that she wasn’t going trick-or-treating. How insensitive of me to not see the obvious connection between boxed baked goods and trick-or-treating. So that whole thing was annoying in itself. But their misery also made me sad. Every kid looks forward to getting candy from strangers on Halloween. And it was just a little heart wrenching helping them into their costumes that night when I could see in both of their faces that they felt the whole charade was pretty pointless. Who were they dressing up for?

So yeah, Halloween kind of sucked. But sometimes things have to suck now so they can be awesome later. Hopefully these drastic measures resonated with the kids. I feel fairly confident that Grace and Michael will think twice before committing the crimes that landed them in this dire situation of not being able to tell bad jokes in exchange for sugar. I know it resonated with me and my husband, as it proved to us that we can bark and follow up with the bite. Even better, the next time the kids call our bluff, all we have to say is, “Remember trick-or-treating? Oh, wait. That’s right. You didn’t go.”

But if you could all do me a solid and pray that the kids are angels right before Christmas, I would really appreciate it. I am living on borrowed time for Grace believing in Santa, and I would really hate for him to dis her due to jackleg behavior on the their last Christmas together.

25 thoughts on “Halloween Without the Trick-or-Treating”