It starts with a 5:30 a.m. bootcamp class. When you get home, you spend 15 minutes with your husband before he heads out to work. It’s the only 15 minutes you will see him all day, but you’re a sweaty mess from bootcamp, and he is dividing his time between talking with you and finishing up his morning routine before walking out the door. You’ll spend the rest of the day doing laundry, running errands, then heading off to spend the night with your daughter’s girl scout troop before your husband even gets home from work. You’re the troop leader, and tonight was the only night that all the girls would be in town to have their final field trip. So 15 minutes with your husband on your anniversary will have to do. END_OF_DOCUMENT_TOKEN_TO_BE_REPLACED 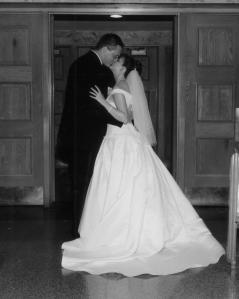 And what am I doing on the ten-year anniversary of this day of all days? I’m having ten four-year-olds over to my house for a superhero themed birthday party. But that sounds about right…because after ten years, two kids, two houses, a dog, some ill-fated fish, and a very temporary turtle, life looks a lot different for me and my husband than it did on our wedding day.

Ten Years is the “Tin” Anniversary, which seems pretty appropriate if you think about it. Tin is not a flashy metal, but it is very practical and useful. It’s used in bakeware and for coating cans because of its low toxicity levels and ability to resist corrosion. It can be combined with other metals to make alloys and solder to join electrical circuits. It is even used in the window glass-making process and can be chemically combined with fluoride to be used in toothpaste. Tin is not imposing; it is easily adaptable. Kind of like a marriage that has lasted for ten years.

After being married for ten years, life is not exactly as flashy as it once was. “Practical” and “useful” become the norm. The never-ending unpredictability of kids, home ownership, car ownership, and work requires a marriage that can be adaptable. In a lot of ways, life does not really belong to us the way it did when we were first married. But that is a naturally occurring element of marriage…just like tin.

Still, our ten year anniversary is a pretty huge milestone. These truly have been the best ten years of my life, and I have my husband to thank for that. And I find tin to be an even more appropriate representation of our life together because of the coincidental fact that the day I met Kurt, he was dressed as the “Tin Man.” (Well, I put that in quotes because it is hard to call some poorly wrapped pieces of aluminum foil a Tin Man costume.) We were both riding on a Wizard of Oz homecoming float in college, and while the attraction was not necessarily immediate (I mean, LOOK at that costume), I should have known this was a fateful moment in my life.

You see, growing up, The Wizard of Oz was my favorite movie. I had a mini-obsession with Dorthy and would often force family members to act out the entire story with me. So it seems pretty darn appropriate for my knight in shining armor to literally be wearing the “metal” suit of the Tin Man. And Kurt played the role of knight very, very well. The whole sweeping-me-onto-his-horse-and-riding-off-into-the-sunset flash and romance was a talent of his. How could I NOT want to marry this man?

Ten years later, it is clear to me that marrying him was the best decision I ever made. Because Kurt is still my “Tin Man.” Though he can still bring the romance with the best of them, he is more my practical knight in shining armor. The kind with an ax who can chop wood to furnish a home for his family and an oil can to smooth over sticky situations. And just like the Tin Man, he has an enormous heart than no one needs to see…it is obvious it is there.

Somewhere along those ten years we may have found ourselves back in Kansas, leaving the daily romance of Oz behind. But Kansas is where Dorthy wanted to be all along, because Kansas was home.