Well, it is almost Easter. And that means a trip to the mall to visit the Easter Bunny. Actually, my kids saw the Bunny by accident this year. Since it seems that recently I have the foresight of a possum (they’re blind, people), I was actually surprised to see the Easter gazebo set up when I took the kids to the mall the other day to get Michael fitted for his ring bearer tux for my cousin’s upcoming wedding.

“Mom! The Easter Bunny is here!”

“Can we go get our picture taken?”

I looked at the two of them standing in front of me, not in their Easter best, but in whatever was clean in their closets. Fortunately, their outfits weren’t too horrible, so what the heck?

There was no line, so the photographer told the kids to go ahead and see the Bunny while he finished checking out the family that had just gone. Cool. Well, not so cool. It took the guy a full five or so minutes to finish up with that family. That doesn’t sound very long, you say. And it wouldn’t have been, if my kids were sitting on Santa’s lap. Because Santa can TALK to the kids. The Bunny just sits there and gives thumbs ups and covers his eyes with his hands. So I tried to strike up a one-sided conversation. Awkward. Very awkward. Five whole minutes of awkwardness. And my kids were no help. The children who were jumping beans of excitement just moments ago were now stoic monks who had taken a vow of silence. Tic…tic…tic… 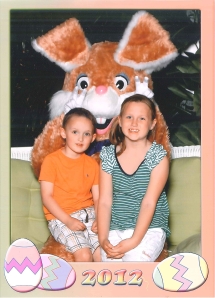 Finally, the photographer was ready to take the photo. By some miraculous form of rabbit sign language, the Bunny and I did cook up a sneaky little pose for the picture. And might I say, all the awkward silence was worth it to have a photo of the Easter Bunny giving my unsuspecting kids “bunny ears.” We also got coupons for Auntie Anne’s Pretzels. Bonus!

So as we walked through the mall to get our free pretzels, I started taking note of the stores we passed and realized ones I will likely never patronize, or will begrudgingly patronize.

Abercrombie & Fitch: Any store that blares crappy techno-dance music and

declares biological warfare with their overpowering cologne reminiscent of awkward thirteen-year-old boys looking to cop a feel during a slow dance at a mixer OBVIOUSLY cares very little about me having a pleasant shopping experience. And I recall the day after Thanksgiving when a few rather buff young male employees were standing shirtless in the entryway. I realize this was a shrewd marketing ploy to entice female shoppers, but it ended up feeling more like an awkward “To Catch a Predator” setup.

Justice: This store makes me weep inside that I have a little girl who is reaching the age where she cares about fashion…or what she THINKS is fashion. A little on the side of hoochie and a lot on the side of hideous, Justice represents most of what is wrong with clothing trends for little girls. And for some inexplicable reason, the mall by my house has TWO of them, catty corner from each other.

The exact same store…doubled. Is there THAT much of a demand for neon tees with graphics of women wearing sunglasses and pouting their lips? Guess what? Little girls don’t need to look like Madonna circa 1985…or Madonna circa 1995…or Madonna circa anytime. So stop telling them this is what is cool. And don’t give me that bull that you supply what the public demands. If you didn’t make it in the first place, the girls wouldn’t know what they were missing. Go take a little walk down the mall to Gymboree and see what any self-respecting mom would buy for her self-respecting young daughter to wear.

Spencer Gifts: Mostly because I’m not in junior high anymore, and I no longer find naughty novelties and black light posters funny or cool.

XXI Forever: You’re not fooling anyone.

We know you are still Forever 21. Putting Roman numerals on your sign won’t magically make your clothes of good quality or taste. Besides, on your website you have a “Club” subcategory under “Apparel.” Cla-ssy.

Plaza Frontenac (for those of you not from St. Louis, this would be our “upscale” mall. You must say it with an uppity tone and draw out the ‘a’…”Plaaaaza Frontenac.”): Yes, I am protesting this whole entire mall…mostly because I wear clothes from Target, and not only can the salespeople tell, but they let me know they can tell. However, I do make two exceptions.

I will eat at Canyon Cafe, because it is the bomb. And I will go to Williams-Sonoma whenever we get a gift card from my husband’s aunt and uncle for Christmas. Because who am I to turn down free money towards some super cool stuff? And the gift card kind of explains the clothes from Target anyway. Maybe on my next trip to “The Plaza”  I’ll pull out my one shirt I own from Ann Taylor, thanks to the outlet mall.

But boy, those were some good pretzels. I hope since God raised Jesus from the dead to give us eternal life, he also bought into the Auntie Anne’s franchise and put one of those suckers in Heaven. Can I hear a Hallelujah? Oh wait, not yet…we’ve still got two more days before we can say that. My bad.

A blessed Easter to one and all…unless you’re Jewish. Then a blessed Passover…unless you’re atheist. Then bummer…no Easter candy for you. But have a good weekend anyway.