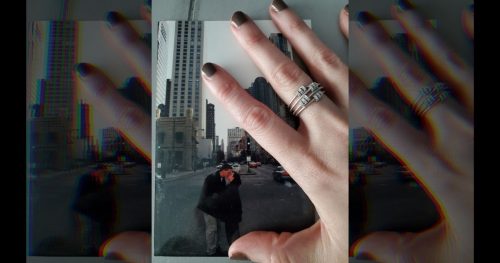 My husband Kurt has held a grudge against one of our local meteorologists since February 21, 2001. Every time he would see her on television, he’d mumble under his breath, “$%*&@# Cindy Preszler.”

Kurt proposed to me on our three year dating anniversary. He had an elaborate day planned for me, starting with him surprising me at my house early that morning, telling me that he had arranged for me to have a day off of work. He was whisking me away to Chicago. Guys, it was like the stuff movies are made of. But being a control freak, surprises can make me a little uneasy, so he wanted to demonstrate how well he had planned this out so I could relax and have fun. As we were parking at the airport, he told me that he even made sure he was prepared for whatever weather Chicago was having (it must have been before you could just google this stuff). He had called one of our local news channels and was shocked when he was connected to one of the actual on-air meteorologists, Cindy Preszler. He relayed the story to me:

“I was just hoping someone there could tell me what the weather was like in Chicago. But I got to talk to Cindy Preszler! I was like, yeah, I’m flying my girlfriend to Chicago to surprise her for our anniversary and I’m going to propose and – … … … …F@%$!!!!!”

We both stopped dead in our tracks. “Can you just pretend you didn’t hear that?”

He was so mad at himself. He had spent months planning this day, and he had just given away the ending. I tried to make him feel better by saying that with a gesture as grand as this, I already had my suspicions. He made lemonade out of lemons with the fact that I still had no idea at what point he was going to pop the question, so he kept me on my toes all day with teases and faux proposals. But the real thing topped all of them, with him down on one knee back in St. Louis, at the place we both said “I love you” for the first time. To me, the day was perfect, even with the spoiler alert blunder. In fact, I think the blunder made it even better.

Kurt, however, did not. And he blamed it all on Cindy Preszler. He maintains that if his question has just been answered by a no-name person, it would not have been a story worthy to tell me, and he wouldn’t have made the slip. So it was basically Cindy Preszler’s fault for being Cindy Preszler. Hence the reason he would curse her out for years afterward.

Fast forward to last night. I was sitting in bed, scrolling through Facebook. A friend had posted an adorable photo of her and her husband celebrating the 20 year anniversary of the night he proposed at the same restaurant where it happened. Wow, 20 years, I thought.

“Wait…” I checked the date on my phone and turned to Kurt.

“Did you know that tomorrow is the 20 year anniversary of the day we got engaged?”

“Yeah. How did we not realize this? The only reason I thought of it was because I saw this picture of the Anics celebrating theirs and thought it was sweet. And then I wondered when our 20 year would be and realized it’s freaking tomorrow.”

“You remember the date we got engaged?”

“Well, you proposed on our three year dating anniversary. Which was exactly a week after Valentine’s day. I always remembered that because I was like of course I get a boyfriend the week AFTER Valentine’s.”

We went back to our respective before-bed activities. After about five minutes, Kurt got up out of bed and went over to his closet. When he came back, he had a wrapped box in his hand, and he got down on one knee.

“OH MY GOD, are you actually serious right now??? You already knew it was the anniversary??? I needed a coincidental Facebook post to make me realize it, and you already knew???” I was laughing my ass off.

He smiled that smile he does when he knows he’s nailed it. “Would you say yes again?”

I mean, how could my answer be anything else but yes?

In the box was a ring, something with a little sparkle, but understated enough that I don’t feel like an idiot wearing it on a daily basis as I carry out all my un-glamorous activities. Just how I like it.

But once again, Kurt’s plan was ruined. I felt bad. “Are you annoyed that I ended up ruining your surprise?”

But again, lemonade out of lemons. “Well, I guess it’s only fitting. You’re just Cindy Preszler this time around.”

That’s good news for Cindy. It took 20 years, but Kurt finally has a new person to cuss out instead of her. And I have another perfect story about just how lucky I am.

10 thoughts on “Cussing Out Cindy Preszler”