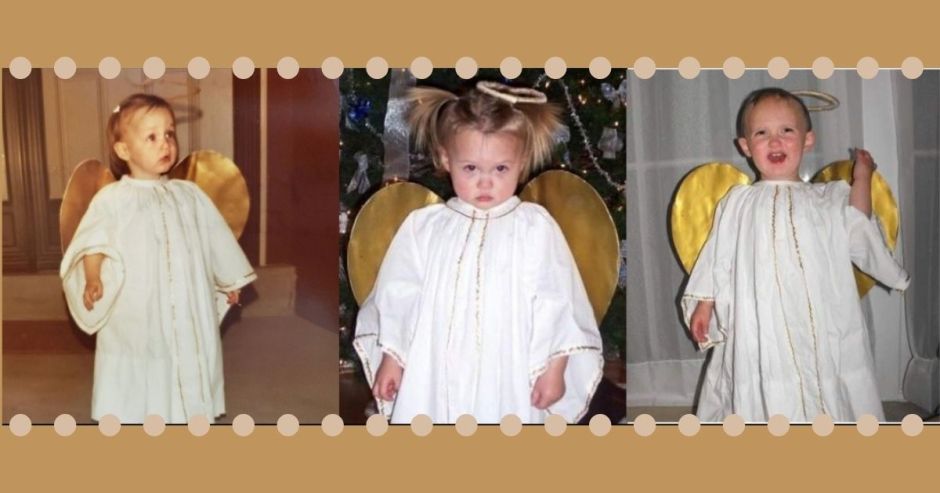 These are three of my favorite photos. They are of me, my daughter, and my son, all wearing the very same homemade angel costume on our respective second Christmases on this planet. I remember when my mom unearthed the costume after my daughter was born – the occasion for which she had been storing it for twenty-six years. I couldn’t wait to have my child put on a piece of my own history. And when she did, it became one of our all-time greatest Christmas cards (despite our continuous efforts to top each previous year): an adorably mopey little angel with the caption, “You better not pout. Santa’s coming.” Then three years later, it was my son’s turn to take part in the tradition. And again, we were gifted with a memorable card donning another grumpy-but-precious angel and a sweet preschool-aged Mary holding our 50lb dog wrapped up as baby Jesus.

Tradition is a beautiful thing. At its best, it is a fine but durable thread that weaves generations together while also allowing them the expression of what makes them unique. But it can also be a thing that stifles. At its worst, it can loom large and overbearing, demanding loyalty regardless of everything.

As parents, we often want for our children the parts of our own lives that have served us well. To take up the hobbies that built our character. To attend the same school we loved. To wear a family heirloom on a big day. To follow in our footsteps in their career path. To be able to celebrate milestones in the same cherished ways we did. Even to do something as trivial as wear the same costume for sentimental photo ops. And usually, those are all desired in good faith and can result in bonds that continue to be carried on.

Unless they become something else.

Sometimes, even with best intentions, tradition can become a pressure that casts a haze of failure, resentment, and disconnect. When it is something that is done simply because it always has been, it is a chore instead of a celebration. When the tradition becomes more important than honoring who people are and what is best for them, it becomes a limitation. And even when the tradition is a cherished one by all parties, it can turn into a thief of joy if circumstances prevent it from being carried out the way it always has.

I am a fierce lover of traditions. And I love that I have photos of both of my children in my old angel costume (even though at the time, neither of them seemed all-to-hip to wear it). But if I wasn’t able to make that happen, I certainly wouldn’t have wanted either of them to feel bad or lacking because they had missed out on something special. Or that our Christmas would have been a failure without the sweet throwback. Because in the grand scheme of life, our holiday cards sans heirloom angel costume would have survived…and met the same fate the ones with the angels did: everyone’s trash cans on January 1.

This is an important perspective I’ve had to remind myself of a lot this year. Because 2020 has had its way with a whole lot of traditions. And the disappointment is real and understandable. But in focusing solely on how things can’t be the way they always have, we miss out on the beauty of what they can be instead.

A father who mourns that his son has no interest in throwing the football around like he and his pop did might unknowingly miss out on seeing his son’s talents as an artist evolve. A mother who convinces her daughter to wear the same school colors as she did could have squandered her child’s opportunity to grow more authentically at a place better suited to her individual needs. A graduate enveloped in the disappointment of not having the ceremonies everyone else had (which, let’s be honest, bites a big one) could fail to appreciate the love and pride people tried to show in the uniquely special celebrations born out of creative labors.

And these upcoming holidays…they will be hard. They will be disrupted. We will miss people and places and things. So much. Our traditions will be put to the test. The failure to be able to carry them out in the same way – or even at all – can litter the whole season with angst and sadness. Or it can be a chance to discover potentials that were never before given the light to be explored.

This holiday, I won’t be making either of my children wear angel costumes. I won’t even make them wear church clothes on Christmas day, even though that’s what we always do. Because I’m not going to try to force this year to be the square peg in the round hole. That only ever ends up one way. Not a happy one.

It may not end up being Christmas-card-worthy, but I look forward to whatever Christmas magic finds its way to us this year.

The moral of the three angels? Savor what you can carry on. Let go of what you can’t. Because the lighter you are, the higher you fly.

And also…be satisfied with an unoriginal Christmas card for a change. (That moral is just for me.)

2 thoughts on “The Moral of the Three Angels”