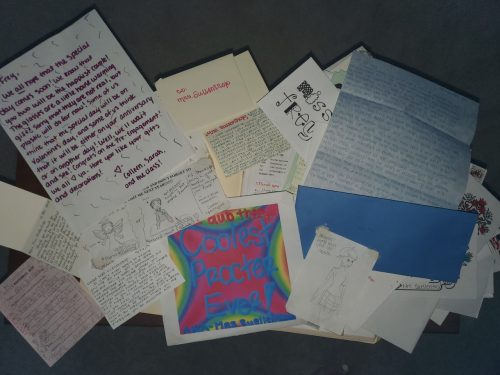 Some of you I still know. Maybe we grab lunch every now and again. Maybe we keep in contact on social media. Maybe we cross paths in the small world that is our city. Maybe we run into each other at a bar, and I become embarrassed that I am clearly not sober even though I am no longer your teacher and you are no longer my student and we are both within our legal right to over-indulge. But the thing is, you could be seventy-five years old, and I could be eighty-five years old, yet I would still think of you as one of “my girls.” And I would still feel the same responsibility to be a good example, to hold you to high expectations, and to count your head on a bus to make sure I wasn’t leaving anyone behind on a field trip.

I see the lives you have built for yourselves. Some of you have accomplished exactly what I thought you would. Some of you have accomplished things I didn’t have the foresight to see for you. Your smiles are just as beautiful as they were when you were sitting in my classroom and I would return a test with an A on it, or give an extension on a paper, or not assign any homework, or announce it was time for Vocab Jeopardy.

Some of you I no longer know. But I don’t doubt the existence of those accomplishments or beautiful smiles, even though I don’t see them.

I want you all to know how grateful I was for you…and still am for you. Some of my most important milestones happened while we were a part of each others’ daily lives. I became an adult the first day I walked into the classroom, fresh out of grad school. Despite being only five years older than some of you, I had to figure out how to make those five years stretch enough to project some semblance of authority, but not so much that I became unrelatable. Though you never likely knew it, having to show up for you every day helped me deal during my dad’s road to recovery after a heart attack. You celebrated the trifecta with me: my engagement, my wedding, and the birth of my first child. There are few things more ebullient than indulging a room full of teenage girls with stories of having the question popped, wedding dress shopping, and baby names. You made some of the happiest days of my life even happier by simply being interested.

In many ways, we grew up together. I didn’t realize it at the time (probably because of all that authority I was trying to project), but I was so young. I wasn’t that far removed from the experiences you were having. The struggle you were waging for independence. How deeply and dramatically you felt things. The stresses that weighed you down (which you now likely look back on and chuckle at how heavy you thought they were). If I’m being honest, part of me was probably still stuck in that phase while I was teaching you. Looking back, it was an honor to be part of some of your most profoundly formative years, when you were just beginning to figure out who you were. I value that I might have played a role, but also that your journeys helped me to continue on my own path of self-becoming.

I have gleaned so much from our short time together, and I am still being nourished by those lessons fifteen years later. Thanks to you, I know more than I would have had we not shared a point in time. Things I have learned from you: Potato bagels are delicious, and Wednesday is the best day to eat one. • Britney Spears is actually singing “You’re toxic, I’m slipping under,” not “Your toxic tongue slipping under” (leave it to Catholic school girls to correct their teacher’s rather scandalous misinterpretation of a song lyric). • You can coax people into doing just about anything if you promise them food. • There is such a thing as a pre-engagement party (which is when your 13-year-old students find out your boyfriend lavaliered you in college and decide pre-engagement anniversaries are worthy of celebrations). • A note of sincere thanks means more than even the most expensive gift. • Putting a lot of time and attention into something is important, but if you miss the mark with your audience, that’s still on you. Do better next time. • “Geese as gorgeous as airplanes” may be the greatest simile ever written in the English language. • Laughter aids learning. • An upset teenager usually doesn’t need you to make it better; she just needs you to listen. • Integrity is often born out of a giant f*ck up. • Never look at a new student list and assume you can predict whether this will be a “good” or a “bad” class. • Keep good records in case of a dispute. Like over the injustice of why someone got an A- instead of an A. • You don’t need to have all the answers to be an effective teacher, you just have to be honest about what you do know. Bullsh*t is easy to smell. • I will never know what Toby’s affiliation to the Penguin Protection Program was, and I have to be okay with that (and so does everyone reading this who has no idea what I’m talking about). • Strength isn’t measured on a sliding scale according to age. Young people can endure, survive, and thrive in spite of some pretty terrible things. • Never underestimate how much greater your impact can be if the other person simply feels seen by you.

I have had to fall back on these lessons over and over again. When dealing with family, friends, and strangers. When planning fundraising events, serving on PTO or school board, and all the other typical suburban mom things I’ve found myself doing. When trying to forge some sort of a semi-career in writing. When “Toxic” comes on the radio. And most importantly, when I am trying to raise my own teenager and pre-teen, as I am now.

My own children are entering the ages you all were when I taught you. And I will admit, it was a lot easier being your teacher than it is being their mother. But being your teacher, getting glimpses into your worlds, has helped me navigate the stage I most feared as a parent. It’s not ALL completely new territory to me, because I got to watch you go through it. Grow through it. You created a basic lesson plan for me to use all these years later, without even knowing you did it.

Just before writing this post, I pulled out my file of notes and letters I received from many of you. I stood at our workbench in the basement, reading each one. Smiling. Remembering. My fifteen-year-old daughter came down looking for me, and asked what I was doing. When I told her, she responded with, “Aw. That makes me want to go write notes to my teachers.” Part of me wanted her to read them, to see that once upon a time, her mom was “cool,” and that there were teenagers who loved spending time with me and were sad to leave my classroom. Teenagers who cared about what I had to say and actually appreciated my lessons. But that’s not who I am to her, and that’s okay. Because I got to be that for you. And you got to be “my girls” before she was my girl. I am a better mother to her thanks to what we were to each other fifteen years or more ago.

I know I may be recalling our years together with rose-colored glasses. It wasn’t always good. We tested each other, frustrated each other. But I can honestly say that the sum of the parts falls firmly in the positive. I hope it does for you as well.  Please know that you are still a chapter of my story, one I tell often, even if only a brief mention. To paraphrase Moliere in The Misanthrope, time has knitted gentle ties between us. And it appears Walt Whitman was on to something with his transcendental view of the interconnectedness of life in Leaves of Grass:

“For every atom belonging to me as good belongs to you.”

Be well, my girls.

Love, Suelly (or Miss Frey…for the stubborn ones. You know who you are.)