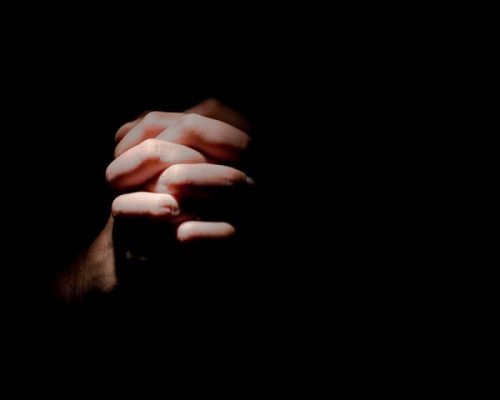 I believe there is power in prayer. Deep in my bones, down into the tips of the roots of what I feel to be true, I believe it has power. But too often I find myself at a loss for how to use that power. It’s a daunting task to know what to request when God is there with what is always an open-ended question.

This past year in particular has tested me. I haven’t always known what to ask of God.

In that time, we lost our dog, searched for guidance over my daughter’s scoliosis progression, helped her through two knee surgeries, watched my dad continue his battle against Parkinson’s disease, witnessed my grandma’s health and mental decline, and were heartbroken by the sudden passing of my father-in-law in November. For some of these, it has been easier to know my prayer. For others, I’ve been at a loss. I never even got the chance to ask God to save my father-in-law. He was gone before I could even try to barter. And sometimes I can’t help but be upset with God when my kids are crying because they miss their grandpa, who’s going to miss their graduations, and band concerts, and weddings, and birthdays. I want to ask God to take away the grief, but I know that’s impossible.

Yet even when you get a head’s up that something’s going down, the praying isn’t always simple. Like with pancreatic cancer. My Uncle Ed was diagnosed last April with possibly the most crap-tastic of all the crap-tastic cancers. It’s the one that the mere mention of its name renders most people speechless…because they know.  They know it’s the most crap-tastic. But at least this time, I had a head’s up to pray that he would be saved.

After the initial shock of the diagnosis, we were quick to rally. Ed’s family and friends arrived in droves to let him know he had an army behind him. The man whose musical alter ego (he was the lead singer in a local band) went by the name Big Daddy Pineapple soon had his own hashtag: #BDPStrong. This let all of us who loved him flood social media with encouragement and support. We bought up anything and everything that had a pineapple on it in solidarity. We were all like, “Yeah, this ain’t happening. Screw you, cancer. You effed with the wrong guy.”

Okay, so…what were we left with? We still had all those pineapples, and we still loved Ed something fierce, and we still believed pancreatic cancer effed with the wrong guy. We still knew he wanted to fight like hell, and we all still wanted to fight right behind him. But we also knew the odds. We didn’t dare give them life with our words, but we knew them. That reality set in during the Purplestride Walk last fall when they asked all the survivors of pancreatic cancer to come forward. Walks for breast cancer are pink seas teeming with survivors, some in the midst of their battles and some who have conquered. At the Purplestride Walk? Two rows of chairs. The survivors took up the space of just two rows of chairs.

And that’s when I was at a loss. Jesus Christ. What does my prayer become now?

Honestly, that miracle was the only thing I was sure of asking God for in the midst of that whole crap-tastic situation.

But then I would hear about him having a bad day. I would hear about how much pain he was in, how just the simple act of living felt anything but simple. And I didn’t want to do it, but then I prayed that God would make it swift and merciful, would let him be at peace. That prayer felt like a betrayal. But there were times when it felt like praying for anything else was just cruel. In those moments, prayer didn’t seem like serenely folded hands and a reverently bowed head. It was more like a tantrum… like a begrudging concession…like a “Fine God, have your way! But here’s my middle finger just for good measure.”

In the end, that last prayer was the only one that was even remotely answered. Ed lost his battle in January, surrounded by the family and friends who still love him something fierce even though he isn’t with us anymore. When the doctor gave him the news that there were no real options left, Ed nobly put down his sword and surrendered, and he slipped away in record-setting time (because he always did like to be a bit of a showoff). It was a testament to just how strongly he had been willing himself to live to fight another day as long as there was hope in his grasp.

And I still don’t know what to pray for. Because what can I ask God to do that will heal all the holes in all the hearts created by Ed’s passing? And I look around and see other people I love struggling with similar situations, with illness and death and loss and tragedy. My family is still mourning my father-in-law. Many I hold dear are dealing with cancers, multiple sclerosis, Alzheimer’s, divorce, mental health conditions, infertility, family problems, and children with serious medical issues. It always sounds like a hollow promise, but I tell them I’m praying for them. And I am. But I don’t always know if I’m offering the right prayer, and I know God answers in His own ways. That’s hard to accept. So much so that sometimes I wonder if it’s even worth it.

But I guess faith means you don’t have to know. Not only that, but we don’t really ever GET to know. So all we can do is what feels right.

I’d rather keep sending up imperfect prayers than none at all.

5 thoughts on “Imperfect Prayers: When You Don’t Know What To Pray For”