I don’t know about you, but after the triple threat of Mother’s Day, End of School Year Teacher Gifts, and Father’s Day, I don’t have enough left in my Pinterest Love Tank when 4th of July rolls around. By now, I’m completely invested in my laissez-faire summer mode, so promises of “20 Simple 4th of July Party Ideas” do little to pique my interest. (It could also be that the accompanying images of perfectly sprinkled cake ball sparkler pops and INDIVIDUALLY wrapped and decorated Twizzlers make me doubt the “simplicity.”)

Being patriotic is about more than the perfect red, white, and blue themed party spread. Yes, the ingenuity displayed in pin after pin of creative desserts and decorations is certainly a trademark of the American spirit. But so are Netflix binges and maximizing your pool time. That’s the kind of patriotism I’m all about at this point in the summer. So if you’re on a Pinterest hiatus as well, here are 3 ways you can show your American spirit this 4th of July:

The 4th of July is a time to put aside politics and celebrate simply being an American. And what better way to do this than to reduce our commanders-in-chief to their swoon-worthiness?

You may have called bull when George H.W. Bush promised, “Read my lips, no new taxes,” but…HELLO…have you ever seen a photo of him in his Navy pilot uniform? And I’d change my name to Louise Anna if it meant that hottie Thomas Jefferson would acquire my territory and woo my independence with his declarations. Ulysses S. Grant is totally the star quarterback of the executive branch: war hero, Reconstruction champion, and he hangs with celebs like Mark Twain. But don’t even get me started on James K. Polk. I can’t tell you one thing about his presidency, but who cares? Because the gentleman is quite the silver fox. I declare him the President of the U.S. of Babe. On the flip side, there are a few who always land in the “just friends” zone: Chester A. Arthur (his mutton chops and even-keeled political temperament made him super likable…just not in “that way”) and James Buchanan (mostly because he always seemed more interested in William Rufus King.) 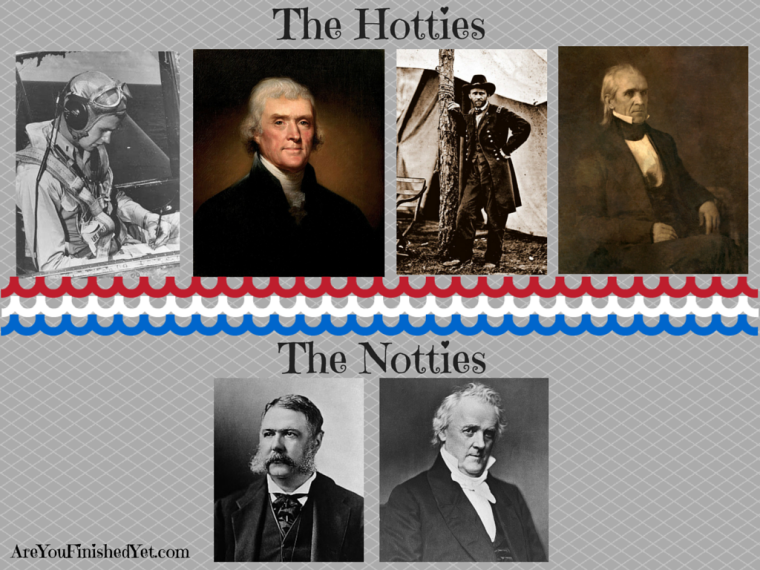 The American spirit involves risk-taking; it’s part of our country’s fundamental core. So make like the founding fathers and stare the status quo in the face. Switch lines at the grocery store when yours is moving slowly (oooh…tempting fate!). Make an outfit suggestion to your tween or teen (watch out…dangerous waters!). Check your Facebook feed before having the chance to watch that highly anticipated season finale on your DVR (it’s like the modern-day Russian roulette). This is the kind of fearlessness that makes the U.S.A. great. ‘Merica!

#3 Be the Best Dressed Folks at the Fireworks Display.

Anyone can wear red, white, and blue. But it takes a true patriot to add a little snazz to her wardrobe. Check out these fly t-shirts my husband and I are wearing from Tipsy Elves. Old Abe Lincoln brings a real endearment to Independence Day-drinking. And partying like George Washington? Get ready to see me tie-dying breeches with pokeberries and birch bark, playing pin-the-feather on the tarred traitor, and dumping my tea into the pool. Admit it…we look like the American Dream.

(Kids’ wardrobes supplied by various children’s clothing stores…likely on a clearance rack…and probably from Target. But you can get your own patriotic duds like mine and my husband’s, and other holiday clothing, over at TipsyElves.com. The first person to buy Tipsy Elves’ Ulysses S. Pants and send me a picture of yourself wearing them will make a special appearance on my social media outlets AND win a copy of my children’s book, Absolute Mayhem. Just because I love ‘Merica.)

How are you going to show your patriotic spirit?

Don’t want to miss a post? Want to stay updated on my author events and news? Subscribe to my Weekly Mayhem newsletter HERE (it’s the weekly newsletter that doesn’t always come weekly)!

27 thoughts on “3 Ways to Show American Spirit Without Pinterest”