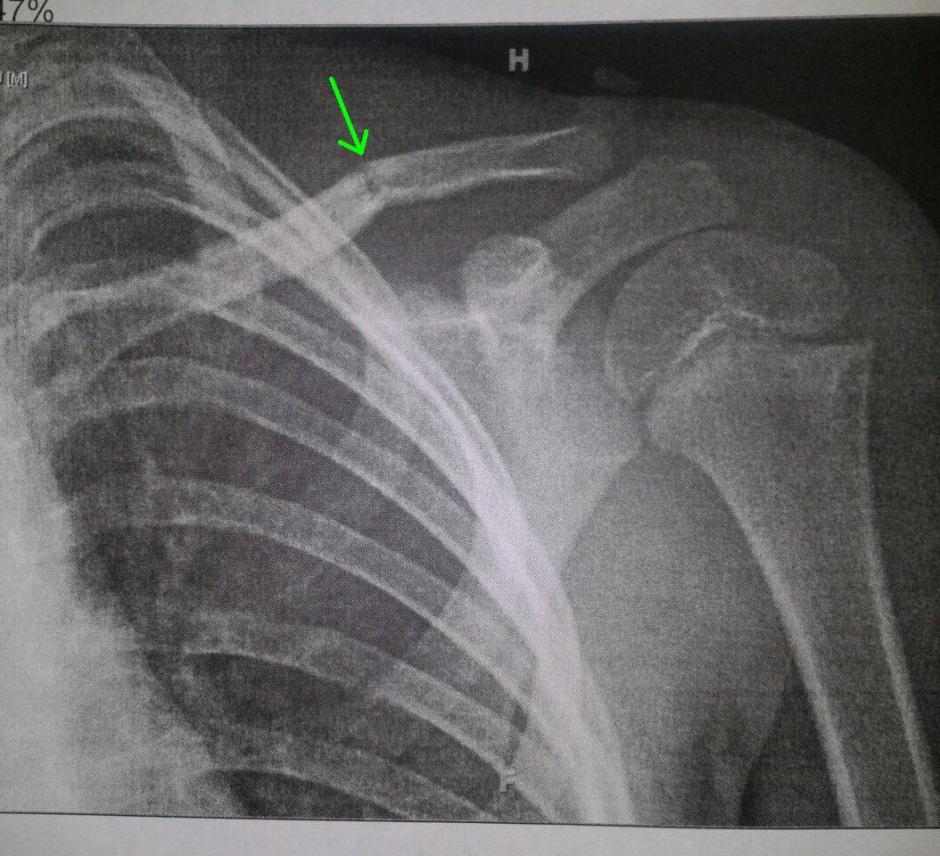 It’s really true. Everyone does. It’s not even like it was this whole mind game where it just seemed like each and every driver was putzing along at a snail’s pace. I literally did not breach the speed limit once on my way to the emergency room. And I couldn’t even vent my frustration by calling them all jacklegs because I was too busy singing “Beautiful Boy” to try to calm down my screaming son. Knowing your child is in pain and not being able to do anything about it, or not being able to get him somewhere where they can do something about it, as quickly as possible is a horrible feeling.

So the day after Michael’s birthday, his bike decided to give him a belated present of a broken collarbone, and the doctor wrapped it up nicely in a sling. Except they forgot the gift receipt, so now we’re stuck with it for about six weeks. We’re all just thrilled about it.

But truthfully, I am very grateful that it was only a broken collarbone. Because judging by the scale of his bike accident, it could have been much, much worse. The kid decided to bike on a neighbor’s very downhill driveway, and when he lost control and couldn’t brake, he ended up flying off of the retaining wall at the end of her drive and crashing further downhill into her yard. PSA: wear your helmets kids. Let your collarbones take the hit.

I am frankly also surprised that it took this boy five years to suffer his first broken bone. Because judging by the scale of his previous antics, it could have happened much, much sooner.

To his credit, Michael has been quite the little trooper. Though he has been somewhat of subdued, sleepy zombie the past few days (in part because of the pain, and in part because of the pain medication), he really has not complained much at all. It was a little heartbreaking to see him try to remain stoic in the emergency room, occasionally wincing and wimpering out when the pain was too much. I was relieved when I made him smile in the x-ray room as I did a little dance wearing my sparkly x-ray lead apron. And he pepped up when the nurse came to give him a copy of his x-ray (which he wanted to hang in his bedroom) and fit him with his sling. Apparently, slings are the new cool accessory to have, because my daughter proclaimed Michael to be “so lucky” that he got to wear a sling. But he quickly reminded her the reason for it in the first place: “Well, Grace, it’s because I broke my skeleton collar.” OMG. I died from cuteness overload. Still, I will admit his little sling is kind of adorable, especially after he decorated it with some stickers he got at the ER.

This experience also taught me that my eight-year-old daughter is a rock star in an emergency situation. My husband happened to be out of town when all this happened (Murphy’s law, of course), so Grace was my support system. And she passed with flying colors. On the car ride to the hospital she helped me sing to Michael to distract him from the pain and prayed the Angel of God prayer. It made me misty. At the hospital she carried my purse so I could carry Michael and did every little thing I asked…and offered more. And she totally played “little mom” telling the doctor about the accident and answering questions for Michael. Despite the Miss Sassafras tone she takes with me on a daily basis, I realized that I truly can count on that kid when it really matters. Is third grade too soon to start babysitting? Because I’m really looking forward to that whole built-in-babysitter thing.

So, like most things in life, this has been a learning experience. And after being a mother for eight years, I have finally gotten my first official broken bone out of the way…though I’m sure not my last. In fact, I can hear Mr. “Wing in a Sling” jumping around in the family room as I type. Then again, jumping next to the furniture instead of off of the furniture does constitute “taking it easy” in his world.

At least next time we hit the emergency room I will know to expect a slow commute on the way there.

15 thoughts on “Fact: Everyone On the Road Goes Under the Speed Limit When You’re Driving Your Kid to the ER”