Fact: My husband should never be allowed to dress our children.

Let me give you a few solid reasons why:

1. He once sported the follicle phenomenon known as “a tail.”

2. For an extremely short period of time, his ear was pierced (and still might be today if it were not for the good parenting skills of his mother who must have had the psychic foresight to know I would have never dated a 6’6 man who looked like he should be a member of Wham!)

3. In college, he almost got a tattoo of his fraternity letters on his ankle after having a few too many beers at a Pointfest concert. (His mom was not there this time, but thankfully I was and had the psychic foresight, and sober judgement, to know he would have cursed that tattoo every day of his life after turning thirty.)

4. He wears shirts with holes in the armpits, sweatshirts with shredded sleeves,  and thinks putting on something nice means wearing a shirt of the Hawaiian flavor. And most of the clothes he owns are in this condition because he has had them since college, sometimes high school.

Oh, and also because my kids look something like this when he’s in charge of the wardrobe situation (we call it “homeless orphan chic”, and yes, the dirt is usually an added accessory):

Try as I might to instill good fashion sense into Grace and Michael, I fear that my husband’s lack of the fashion gene might have been passed down, or at least severely suppresses any style conscientiousness they may have gotten from me. Especially in Michael’s case. He only ever wants to wear one of

two things: what he calls “cool shorts” (which are gym shorts in any form) or his Spiderman costume. Winter, spring, summer and fall, he schleps around in a pair of over-sized yellow rubber boots I got for six dollars at a

second-hand shop. And at some point each day, whatever he IS wearing becomes a moot point because he will inevitably end up running around in his underwear (I believe his skivvies made an appearance in an earlier blog post).

And then came the Michael haute couture moment… 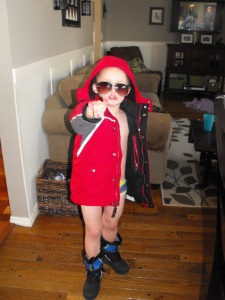 The silver lining is that one day, I can use these photos against him as payback. Unless he  turns out to be more like his dad, in which case he will probably still be wearing the same stuff.

I will leave you with the most recent fashion creation of The House of G & M. I find the daring mix of fabrics and color to be both modern and progressive. This is a look for kids on the go, who are off trying to find Big Foot in the backyard while being ready to extinguish spontaneous pretend fires set by super villains, or who need to quickly transform for an elegant dinner out with friends at McDonald’s. Nina Garcia on Project Runway might find it a little too pedestrian, but I see a lot of potential here: 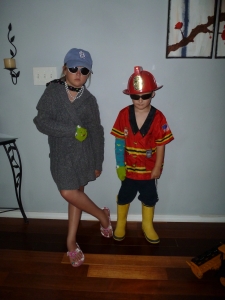