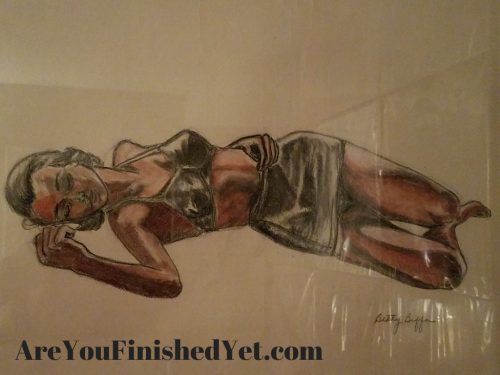 Last month, I lost my maternal grandmother, less than three months after losing my paternal grandfather. Where once there were four, and then three, there is quite suddenly now only one: my paternal grandmother. I count myself so very lucky to have had all four of my grandparents into adulthood. In a way, it feels selfish to be upset about having to let them go. But the most extraordinary thing about knowing your grandparents as an adult is that you come to know them as people. They aren’t just the ones who let you eat cookies past your bedtime or think you played the recorder the best during the school performance. You are able to see their complexities of character, understand sacrifices they made, and come to appreciate them as the people everyone else around you knows them as. I was blessed to find out that not only were all my grandparents extraordinary grandmothers and grandfathers, but they were also extraordinary people. Because of this, I wanted to share the eulogy I read for my grandmother at her funeral. I’ve written about her before on this blog…about the memories that were stirred up when I had the chance to revisit her old home, and about her battle with Alzheimer’s. But she was more than that. So very much more…

When Irish eyes are smiling, it probably meant Peggy Murphy Nestor was looking at you. I have no doubt that if Grandma had been asked to describe herself, the first thing she would have noted was that she was 100% Irish. It most likely would have outranked the other descriptions she would have been proudest to tout: mother to her precious three, wife to the inimitable Big Ed, grandmother (a.k.a. Mema) to her Irish blessings, great-grandmother to the ones who call her GiGi, aunt to the world’s most perfect nieces and nephews, resident of Kirkwood, alum of God’s choice of high school St. Joseph’s Academy, and lover of the color Kelly green. If you knew Peggy, you also probably knew she had been to Ireland three times, always wore her gold shamrock necklace, chose her favorite celebrities and athletes by whether they were Irish, thought it was ridiculous when people didn’t spell names the “Irish way,” and had so many Irish ornaments that she got a second tree for them…which she kept up all year round, because every day was Irish celebration day in the Nestor household.

But of all the things that meant most to me about my Grandma…my Mema…, being Irish wasn’t really one of them. *looks to heavens cautiously* …I’m waiting for her to smite me…

What will forever be emblazoned in my heart is that she was so perfect at being a grandma. I almost don’t know how to eulogize her, because I can’t decide which parts of her story to tell. She was so integral to our family’s lives that there are TOO many memories. When I try to call them to mind, they all come rushing to be remembered and become muddled together, like too many people trying to walk through a door at the same time. And when I attempt to pull just one into focus, I can’t decide who should get to come through the door first. Because they are all equally beautiful. Even the ones where she’s wearing her sleeping cap filled with cotton balls to protect her impeccably frosted hair.

The little girl with gorgeous blue eyes and pristine ringlets in her hair grew into a knockout with a dynamite smile. When I look at old photos of her, she seems like a movie star to me, cigarette delicately held between her fingers, legs crossed elegantly. But her face doesn’t hold any of the haughty air of a celebrity. In her face I see all the same things that stared back at her grandchildren from eyes lined with wrinkles: kindness, love of family, generosity, and a penchant for finding things to be “neat-o.” It’s easy to understand why my grandpa fell in love with her.

And they were the perfect match, Ed & Peg. They balanced each other and together built a family I love being a part of. They wove a pretty idyllic life for their three kids, then went on to graduate to magical status as grandparents. I mean, Grandma even had the power of magic kisses, which she would wield like a boss to heal skinned knees, bumped heads, and wounded prides. She was also a master illusionist, appearing to dine with her family yet never actually eating any of her dinner as she tended to the needs of everyone else.

And that’s probably the crux of it, the reason she was so good at being a grandma: she knew how to take care of everyone else. She spent her life doing it: being there for her children and their spouses, visiting her mother in the nursing home just about every single day, caring for her aunts Betty and Ginny as if she were their child, nursing her husband through his many and long battles, being there for countless friends and family members, and lending support to charities, organizations, St. Peter’s Church, DeSmet, Fontbonne, and her beloved St. Joe. Taking care of people was her job, and she was good at it.

The other thing she was good at was blind love. If you managed to capture a bit of Grandma’s heart, there wasn’t anything anyone could say to make her un-love you. Loyalty to her clan ran deep. I know this for a fact because when I told her I had landed my first high school teaching job, and that it was NOT at her alma-mater St. Joe, but at rival Villa Duchesne, she still loved me…probably because, in her words, “at least it’s not at Viz” (an even bigger rival). And when several of her grandchildren and great-grandchildren had the audacity to be born in the month of March, but NOT on St. Patrick’s Day, she didn’t hold it against them…at least not for too long. Yeah, Grandma was kind of a pushover in that respect. I always had this drive to impress Grandpa that I never had with Grandma…not because she wasn’t as important to me, but because I knew she already automatically thought I was wonderful. It’s what made her hugs extra comforting, her house extra welcoming, and her butcher bologna and Mema cheese (known to the rest of the world as Lorraine swiss) sandwiches extra tasty. (That’s right. The lady had a whole cheese named after her. Talk about a legacy.)

That’s probably what has made these last few years seem so cruel. The dementia had robbed us of so many of the things responsible for endearing Grandma to us, and it seemed an unfair payback for the way she lived her life. She was physically here, but she wasn’t able to take care of us. And it didn’t feel like she could blindly love us. I know all those things were still in her somewhere, but we couldn’t even reminisce about them with her. Finally, all that has changed…not for us, but for her. We will still miss all of those things. But she is now reclaiming them. She can be cognizant of every person she has ever loved. She can walk the rooms of her dream house on Bodley, enjoy a cup of Maxwell House International Coffee instant orange cappuccino, smoke a Kent, go the hairdresser, eat a meal at Eleven Mile House with Big Ed, climb the lighthouse in Hilton Head, have a martini with three olives with her friends in the ratskeller, cook corned beef and cabbage, fill Christmas stockings with scotch tape, tie a perfect bow on a dress, keep the cookie drawer stocked, wear Kelly green every day, blow magic kisses from the clouds, and sit on every Irish hill she ever dreamed of…all at the same moment. Her end here with us will hopefully be the beginning of everything for her.

We won’t be able to see those Irish eyes anymore, but you can bet they are smiling down from Heaven.

4 thoughts on “When Irish Eyes Are Smiling”