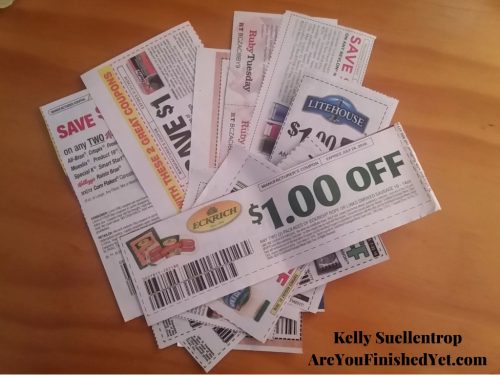 Almost every week for I don’t know how many years, an envelope would land in my mailbox, my typewritten address perfectly stamped out directly in the center. I never needed to look at the return address to know exactly who had sent it or what I would find inside. There was rarely a note…just a handful of meticulously clipped coupons from the current week’s mailer. And every time, it made me smile. I could hear my Grandpa’s voice saying, “Well, I don’t know if you can use any of these, but just throw them away if you can’t.”

Today I had to come to grips with fact that I won’t ever get an envelope full of coupons in the mail from him again. This morning, at the age of 96, the kindest, smartest, most honest, most humble, and thriftiest angel received his wings with a giant clap of thunder that shook our house and jolted me awake. He always did have impeccable timing, though it was a bit uncharacteristic of Grandpa (otherwise known as Bebop to a younger version of me, and now to my kids) to make such a grand and attention-grabbing exit. As the most unassuming person in any room, he didn’t like to make a fuss or overstay his welcome. When he thought it was about time to leave, he’d say to my Grandma, “We better get out of here, Monica.” And he meant it. He’d be out the door almost before anyone could tell him what a pleasure it had been to spend time with him…and it was always a pleasure. Always. Given this, there’s no way he would cause such a ruckus upon his worldly departure. There had to be a better explanation for all that thunder. My daughter thought maybe he was up there tipping over outhouses, which is how he confessed to spending his Halloweens as a kid (in my Grandma’s words, “Oh, he was ornery!”). But I think the likelier cause was that the man who always had a joke was already making God belly laugh. I have a feeling Bebop had been saving some prime material so as to make a good first impression at the pearly gates.

But back to those coupons. I’m not sure I could think of a better symbol of Bebop’s life than those envelopes of coupons. Because first and foremost, the man was a German banker. And not just for his career. He was pretty much a German banker in his off-time as well. He knew how to save a penny, then where to invest it. That respect for wise spending combined with his incredible work ethic took him from a poor farm boy to a successful businessman who not only provided for his family, but passed on his tools and knowledge. And extra coupons.

But those coupons weren’t just about saving money. I mean, clipping coupons is the WORST. I can barely bring myself to do it for my own grocery shopping, let alone someone else’s. But every week, he did it. Even when he and Grandma had little use for coupons themselves, he still went through with his pair of electric scissors and snipped $1.00 off diapers and 50 cents off Jimmy Dean sausage for his grandchildren. Because he loved us. Because he wanted to take care of us. Because he was thinking of us. He was always thinking of people. And if you were lucky enough to meet Bebop, you could be sure at some point, he WOULD think of you. Because the man had a memory to rival any computer ever built, even up to the very end. And if he loved you, even if he just liked you, you can bet you were a recipient of his generosity at least once in your life.

But don’t think he wanted praise for that. Because he didn’t. Bebop was just like his coupons, tucked away in the back of the paper, no fancy front page headlines vying for anyone’s attention. He just wanted to quietly help you save on a box of cornflakes and didn’t think anyone needed to make a big deal about it.

Well, I’m going to make a big deal about it. Because the life Bebop lived is one I would wish for anyone. The world would certainly be better with more Bebops. Honestly, I’m sad now for a world without the one we had. It’s hard to believe this day is actually here. Logically, everyone’s time comes. But he seemed so invincible to me. I know it’s selfish to want to keep him longer…he was ready after 96 years of good living. And the tragedy of such a long life is that you have to bear the loss of so many of your loved ones – some of whom, by the presumed natural order, should have outlived you. Now he can be with his parents again, his siblings, his friends, and his infant daughter, who died just after birth, and whom he would talk about with the smallest of breaks in his voice.

I’m happiest for her, the one who never had the chance to know what a special father she had. Now she gets to do all the things with him that we did growing up: going on long walks while eating peppermint candies, watching Looney Tunes cartoons with him, having him save her from garter snakes in the backyard, putting in the last piece of a 3000 piece puzzle, watching him laugh hysterically while retelling the latest Dennis the Menace comic, having him dare her to give him five as hard as she can, playing office on his typewriter, and feeling his arms around her…because he really, really, really loved holding babies. She’s also in for another treat: everything is about to get a little cheaper in Heaven, because I’m sure Bebop brought all the coupons with him.

As for me, Bebop didn’t leave me empty-handed as he left this world. After arriving at my grandparents’ apartment this morning, my mom walked up and said, “Grandpa left you one last thing.” It was a stack of meticulously clipped coupons he had never gotten around to sending before he got too sick. They have all already expired, but it doesn’t matter…because there is no way I am going to part with them anyway. They are my coupons from Heaven.

17 thoughts on “Coupons from Heaven: A Eulogy”